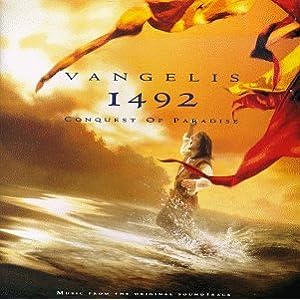 This beautiful score rests comfortably somewhere between a new age album and a soundtrack album. The new age influences keep the score at an almost constant ambient level, never getting too loud or too quiet like some soundtracks do. It is also succesfull in keeping the dynamism in moods and sound textures you would hope from a soundtrack. It ranges from peaceful journies to dark and dramatic. Wooden flutes, keyboards, vocals, percussion and even classical guitar (on “Deliverance”) are used selectively to create the right sound for each song. Most of the album is on the lighter side, but “Deliverance” and “Hispanola” delve into darker depths. The use of percussion and a chorus which sounds more like it is participating in a dark prayer than singing create a spectacular mood. “Light and Shadow” may be the opposite side of the coin of “Hispanola”. The track is similar in sound in many ways but is more appropriate for something holy than something unholy. “Moxica and the Horse” is a bit on the creepy side.

Overall a very good album, with a rage of moods available for various situations. I don’t think it would be my pick if I could only bring 1 cd with me to DM a game which I knew nothing about beforehand, but I do think its a very good addition to any GM’s library.