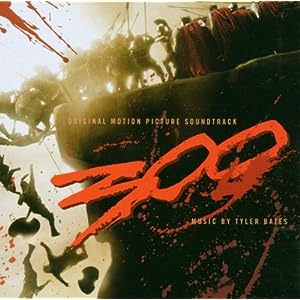 This soundtrack perfectly compliments the movie. If you didn’t care for the movie you may not like the soundtrack, but I do suggest you give it a listen to. If you loved the movie you will probably love the soundtrack. Both the exaggerated and glorified story of the 300 warriors and the accompanying score are larger than life- living on a truely epic scale. Both the film, which is about 90% fight scenes, and the score, which uses heavy percussion and distorted electric guitars slamming down power chords when appropriate are full of raw machismo. Neither bothers with subtlety or gray areas. The story is straightforward and the characters unwavering in their principles. The score is beautiful, powerful, mystical, creepy and more. Each track strongly develops the particular mood or theme it is portraying.

Suprisingly the score isn’t all battle tracks. There is a rich variety of moods and sounds. Some tracks use only acoustic instruments while others rely on electric guitar to push them over the edge. The modern sounding pieces would be suitable for those GMs who don’t mind using such music in their fantasy games or GMs looking to add some spice to a game in a modern setting. Don’t worry there are plenty of tracks without electric guitar for those GMs who try to stay true to the sound of the times. These tracks would be suitable for any fantasy game (especially ones with a darker side or playing out on an epic scale). I used a few tracks for a game that took place in a setting similar to ancient Egypt.