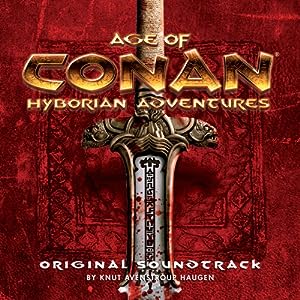 This is a GREAT soundtrack for gaming! Here’s some notes I took on it a while back, it covers at least half the songs.

“The Dreaming”, “Nighttime Journey”, and “The Lure of Atali”-female vocals, and kind of a dramatic and mystical feel.

“Sands of Forgetfulness” and “Damp Barachan Nights”- quiet pieces that seem to represent a stillness. Maybe good for nights around the camp fire or a town when there is a lull in activity.

“The Awakening”- heavy percussion and doomy chanting. Not the kind of music the player’s want to hear, well maybe the fighter!

“Fields of the Dead”- Creepy strings open up for a female voice over a mystical feel.

“Echoes of Atlantis”- an ambient and magical piece, gets heavier at the end.

“Hamlets of Aquilonia”- Town/village music if I’ve ever heard it.

“Foundations of the Temple” A “heavenly” choir over calm music. Temple.

“City of Mages”- Creepy flutes and a Middle Eastern feel.

“The Dreaming Anew”- Female vocals over a darker string piece.