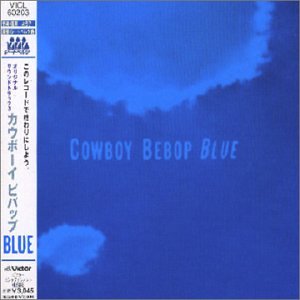 Listen to Samples & Purchase
Artist: Yoko Kanno and The Seatbelts

So I love this show, but it wouldn’t be nearly as fantastic without the amazing soundtrack. Most of the music is jazz/blues/folk. Obviously this doesn’t work for the typical medieval fantasy world, but since it worked so good for the show, I’m sure it could work great for a particular type of campaign. This is the first disc in a series of discs- COWBOY BEBOP (OST I), NO DISC (OST II), Vitaminless (Mini-Album), BLUE (OST III), and Music For Freelance (Remix Album).

I have included Amazon.com reviewer “catsonmars” review of the individual tracks:

“1. BLUE — The emotional and ambient ending to the entire COWBOY BEBOP series. Starting off with a beautiful chorale sung by soprano Soichiro Otsuka (with Gabriela Robin), the song then goes into a steady and touching vocal by Mai Yamane.
2. Words That We Couldn’t Say — A semi-latin sounding ballad featuring guitar and marimba, with vocal by Steve Conte.

3. AUTUMN IN GANYMEDE — Downright groovy. An awesome bass solo starts off the first BGM track in the series, from the episode “Boogie-Woogie Feng Shui.”

4. MUSHROOM HUNTING — “Let’s kick the beat!” Naturally the song from the hilarious episode “Mushroom Samba” would be included in the third soundtrack. ;) A fun, rollicking piece with voiceovers by Tulivu-Donna Cumberbatch.

7. THE REAL MAN — Some hardcore, bass-laden techno seems almost out of place, but perfect for the CD nontheless. Ending on an absolutely startling stop, the piece is perfectly coupled with the next.

8. N.Y. RUSH – A New York jazz version of the big-band piece “RUSH” from OST I. Very clear and adept studio recording makes it a different piece from the original—not that both don’t offer a great listen.

9. ADIEU — This heart-wrenching slow jazz piece is a big theme throughout Cowboy Bebop (emerging often in one form or another), and this does not disappoint! Vocalist Emiliy Bindiger could be a little more in-tune, but it’s still a great song.

10. CALL ME CALL ME — There is no way to describe this piece. Almost country sounding, this pleading song is used in the final scene of one of the most dramatic episodes in the series: “Hard Luck Woman.” Steve Conte provides a wonderfully flowing vocal to the song, which mixes a rock beat with an incredibly strong string section to create… a masterpiece!

11. AVE MARIA — Kanno’s own version of “Ave Maria,” used in the opera scene of Bebop session 5, “Ballad of Fallen Angels.” A beautiful vocal by Jerzy Knetig and excellent orchestration showcases Yoko Kanno’s true classical compositional talent, which may be witnessed in full force in some of her other scores. ;)

13. FLYING TEAPOT — A lighthearted piece with piano accompaniment, with heavy lyrics that cynically contrast the beautifully cheerful music. Vocalist Emily Bindiger is a little flat at times, but the song is very beautiful.

14. WO QUI NON COIN — Aoi Tada (voice of Ed in Cowboy Bebop) offers a sad vocal to this hauntingly beautiful song. The second verse is in some sort of gibberish language, (as are a lot of the vocals in the series) but the first verse is in Japanese.

15. ROAD TO THE WEST — Ambient, angsty saxophone jazz paired with flowing keyboard synthesis makes this piece sound what Kenny G would sound like if it were possible for him to release a song of tension. ;) Used in several dramatic and action-packed scenes in the series, this piece is as if the saxophone itself were crying.

16. FAREWELL BLUES — A full jazz combo version of “STELLA BY MOOR” or “The Singing Seas” (NO DISC/OST II). A perfect note to end the CD on, even though there is a hidden track…

17. See You Space Cowboy — An alternate version of the ending theme to Cowboy Bebop, “The Real Folk Blues.” Used in the final episode of the series. A less intense yet sadder version of the original, with new lyrics and complex instrumentation."