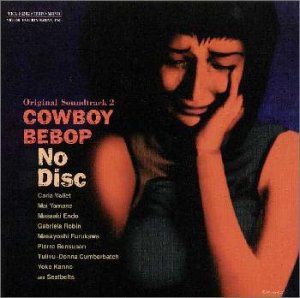 Listen to Samples & Purchase
Artist: Yoko Kanno and The Seatbelts

So I love this show, but it wouldn’t be nearly as fantastic without the amazing soundtrack. Most of the music is jazz/blues/folk. Obviously this doesn’t work for the typical medieval fantasy world, but since it worked so good for the show, I’m sure it could work great for a particular type of campaign. This is the first disc in a series of discs- COWBOY BEBOP (OST I), NO DISC (OST II), Vitaminless (Mini-Album), BLUE (OST III), and Music For Freelance (Remix Album).

I have included Amazon.com reviewer “catsonmars” review of the individual tracks:

3. Don’t Bother None — Some hardcore blues, voiced by Mai Yamane.

7. Want it All Back — Used in a chase scene during the second episode, this rockin’ song is fun to sing along to! Vocal by Mai Yamane.

8. Bindy — A strange and fun instrumental piece with an arabic twist to it. The drum loop is skillfully done, and the layering of the two melodies creates a very fun piece. ;)

9. You Make Me Cool — Okay, so vocalist Masayoshi Furukawa’s english isn’t perfect, and the song sounds like a cheesy lounge-lizard type song, but that doesn’t stop it from being a good song. ;)

12. ELM — This is an absolutely beautiful piece. The skilled guitar and beautiful vocals provided by Pierre Bensusan make for an ambient and incredibly moving piece.

14. Gateway – A fun jazz piece that may seem a little squeaky until the piano solo—but it’s well worth the wait. ;)

15. The Singing Seas — A slow jazz ballad sung by the skilled Tulivu-Donna Cumberbatch.

17. Forever Broke — A superbly dramatic guitar version of “SPOKEY DOKEY,” from OST I. Used in the stunning final episode, in one of the most dramatic scenes in the series. (Of course, I wouldn’t spoil it for you. _)

18. POWER OF KUNG FOOD REMIX (Tank!) — A remix of the show’s opening theme, Tank! Very smooth, including sound clips from the show and slowing the general tempo down a bit to create a more atmospheric feel."