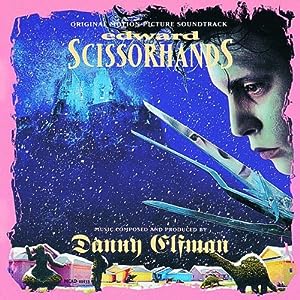 Listen to a Sample or Purchase
Artist: Danny Elfman

To listen to this soundtrack is to take a journey to a world full of beauty and magic. The use of soft female wordless vocals over strings and keyboards (I think) that almost sound like a music box creates an enchanting lullaby. Some tracks, such as “The Cookie Factory”, “Ballet De Suburbia”, and “Edwardo the Barber” I could picture in another Tim Burton film, The Nightmare before Christmas, because they have that sound of strange little Burton-esque creatures moving about as if they were dancing. “Final Confrontation” has a little action to it, though its not on the heavy side.

My favorite tracks are “Introduction”, “Storytime”, “Castle on the Hill”, and “Ice Dance” for their beatuy and magic.