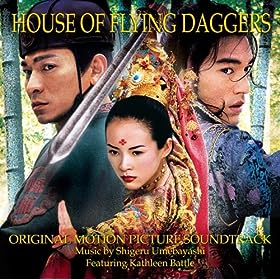 A beautiful soundtrack featuring mainly wooden flute, strings, and percussion. Most of the album stays on the softer side. Sometimes the track is almost entirely a solo instrument while other times a lead flute or violin (I think?) is backed up with strings and percussion. Two of the tracks “Beauty Song” and “Lovers” feature female singers with lyrics (One in Chinese- not sure if it’s Mandarin or Cantonese, sorry- and the other in English). The only track that really breaks from all the other is “Echo Game”, it is all percussion and would make a great battle track. That being said, don’t confuse it with “Battle in the Forest” which is a little heavier on the percussion than the other tracks, but I don’t think it is sufficiently upbeat or heavy to be called a battle track. Also the tracks “No Way Out” and “Ambush in Ten Directions” might sound like they would be predisposed for action, but again I wouldn’t use them this way. I’m not saying you can’t, any track can be useful in certain ways in the right conditions, but they just don’t fit my general criteria.