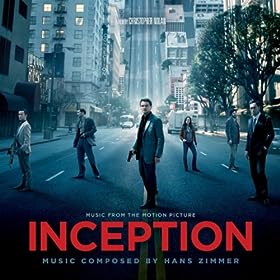 When I saw previews for this movie it just struck me as another Hollywood special effects action movie and all the “buzz” and reviews were about the end, which I find usually to mean that there was so much foreshadowing that it is totally obvious but somehow everyone else is blown away. So I never saw it in theaters. When I went over a friend’s house to play in their game the DM used a track from this album and I thought it was awesome. I asked him what it was and he told me Inception. They all immediately told me to watch the movie, one even offered to let me borrow his DVD. First thing I did was checkout the soundtrack, because the movie still didn’t interest me much. Now I tend to separate films and their soundtracks (as you’re probably noticing that I usually don’t mention the film in my reviews, and very often I haven’t even seen the film), however the music was so interesting, engrossing, intense, and innovative that it made me actually want to check the movie out.

OK, that being said, this is an amazing score which has its quieter moments and its louder more intense moments. There is a dreaminess to it, actually I’d say surrealism to it that pervades most tracks. Zimmer has incorporated more modern sounds into his orchestra and the two blend together amazingly. While it may be a bit “modern” at times, I wouldn’t hesitate using it for a fantasy game.