LotR- The Return of the King 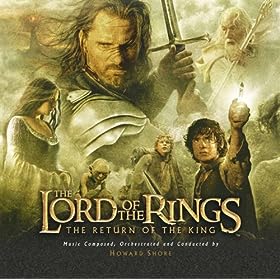 Some of the more consistant tracks are: “Minas Morgul”, “Twilight and Shadow”- it doesn’t change themes but the volume tneds to rise in the middle", “Ciruth Ungol”- though the very end picks up pace, and “Shelob’s Lair”- would be a good action/battle track if the first minute of so is skipped or used for description leading up to the action/battle.

LotR- The Return of the King