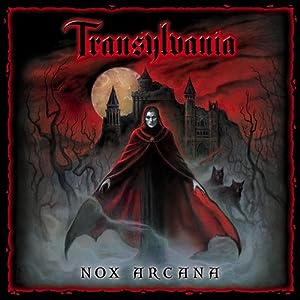 If you have heard of Midnight Syndicate then you know what Nox Arcana is all about- “imaginary soundtracks” of a gothic horror nature (for the most part). Music production seems to be entirely based on keyboard midi and other sampled instruments, which is in my opinion the one shortcoming of their music (I think the music would be significantly better if it were performed by real instruments, because, let’s face it, while production quality has gotten much better, you can often tell the difference and it makes the music sound a little cheap or cheesy.) Nox Arcana started around the time that Midnight Syndicates production improved a bit, meaning that while this is one of their earlier albums it doesn’t suffer from the problems of Midnight Syndicate’s earliest albums.

Transylvania is a half-way decent gothic horror album inspired by the themes of the story of Dracula. I would say it makes good filler for a Ravenloft-style campaign, however I would not rely on it for those really important horror moments, instead I would go to something like Dracula by Phillip Glass and the Kronos Quartet.

I also want to mention that I actually really like the track “Visitor in the Night” which is just wind effects with creepy whispers. I think it came out really good. “Bats in the Belfry” is another short sound fx track, I think it would be really good if they had expanded on it, making it a few minutes long because repeating just those 36 seconds will get pretty repetitive I imagine. “The Howling” is another sound fx tracks that would be really good if they cut out the spoken word at the end. :( Also like “Bats” it could be expanded a few minutes for optimum awesomeness.